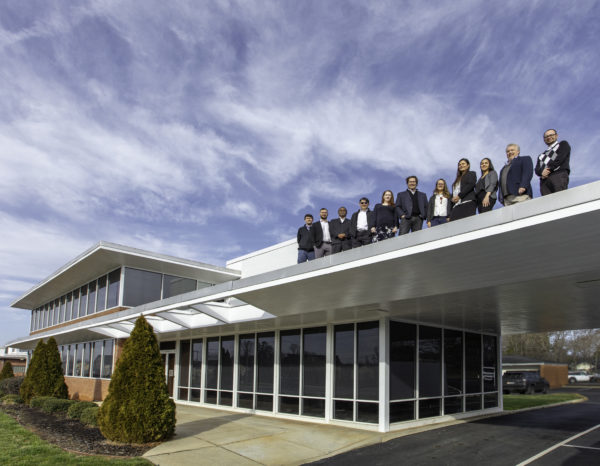 In June of 2019, C.L. Helt, Architect, led by Tim Johnston, transferred its growing operations from the buzzy center of Charlotte to the quaint, historic town of Belmont.

Leaving the 15th largest city in the U.S. for a town of barely 12,000 inhabitants was an unusual move, but it was the perfect choice for the growing design firm. The location has helped Johnston and his team recruit talent, manage both modern  ground-up and historic reuse projects across the U.S., and made it possible to expand their headquarters twice.

Johnston says their new location better fits the firm’s profile and is a perfect place to showcase the firm’s upcoming rebrand. “We’ll announce a rebrand soon that balances our 50+ years of architectural experience with our modern design approach,” he explained. “Belmont and Gaston County, with their mix of amenities tucked into a fabric of historic buildings, uniquely fits our trajectory.”

Belmont was always an option during the firm’s year long search for a new, larger headquarters. The final decision, however, didn’t come lightly. “We had to evaluate what crossing the Catawba would mean for our current team’s commute and what it would mean for the firm to no longer have a Charlotte address,” Johnston said.

When an underutilized mid-century modern office building at 6405 W. Wilkinson Blvd became available for purchase, Johnston said they “had to jump on it.” The sleek, clean lines of the property were perfect for the architect, whose background is in modern, minimalist
design.

The move placed the firm in the middle of Gaston’s thoughtful revitalization of storied historic structures. In Dallas, NC, for example, Johnston’s team helped breathe life into a two-story brick building that’s been a fixture in Dallas’ downtown for 150 years. The building, which is now home to Sammy’s Neighborhood Pub, sat idle for years. “It takes a lot of passion and creative thought to renovate some of these older buildings and do it in a way that makes it economically viable,” he said.

In Belmont, the firm is handling design work for the Trolley Barn, a new facility that will house three refurbished, battery-powered passenger trolleys. When complete, the site will serve as a museum of Gaston’s historic rail lines, a public event space, a trailhead with public restrooms, and the center of a unique amenity in Belmont.

Gaston’s collection of notable buildings, like the former textile facilities in downtown McAdenville, gives Johnston’s team a chance to showcase the area’s unique history. A key aspect of the design process included proposing the Dynamo 31 brand which celebrates McAdenville’s connection to a famous American inventor. In 1884, Rufus Yancy McAden commissioned Thomas Edison to design and install an electric generator that created electricity from the flowing waters of the South Fork River. It was the first such dynamo in North Carolina and the 31st designed by Edison. “McAdenville has been at the forefront of sustainable ingenuity for much longer than most people realize,” Johnston said. “We found that ingenuity inspiring and felt that the name, and the design, should inspire the people that work there as well.”

“It’s really exciting to take historic buildings like the one in downtown Dallas and Dynamo 31 and turn them into something new,” Johnston added. “As an architect, it’s a big part of the draw to working in Gaston County.”

Beyond Gaston, the firm’s large and growing client list around the country called for innovative remote project management and additional staff. “We’re working on several projects for a client in Texas, including a large modern multifamily complex,” Johnston said. “We thought we’d need to open a satellite office there, but with the addition of several small conference rooms we call Zoom rooms we could communicate more personally and directly whenever needed with our clients.”

The 14,000 square foot building on Wilkinson Blvd offered plenty of space for the firm to expand. Its location—close to Charlotte, the airport, and I-85—cut travel time for Johnston’s team.

“We’re set up to work remotely, but we have such a collaborative team most prefer to come into the office,” Johnston said. Their team members live as far away as Kings Mountain and Statesville as well as in Charlotte. “We’ve found that our Belmont location may have
added a mile or two for some of our original Charlotte staff’s commute, but the traffic is less so their drive time decreased.”

That ease of access, plus Belmont’s high quality of life, makes it easier to recruit talent from a broader geography, Johnston said. “We have restaurants within walking distance and all the amenities we need within reach without the traffic.”

Moving from a popular neighborhood in the city center to a small, quaint town wasn’t a common exercise, especially before the pandemic accelerated the work from-anywhere movement. But Johnston sees it as the ideal step for his growing firm.

“There were those who warned us that ‘your clients may view you differently because your address is not in Charlotte,’’’ he said. “I’m glad we ignored those warnings. We’re evolving as a firm and growing our team. Belmont and Gaston County have been the perfect place to do
it. There’s so much energy in these towns right now, it’s exciting to be a part of it.”